NB: In case you’re interested in winning a copy of Dark the Night Descending, even though it’s self-published, I’m giving away five books on Goodreads right now!

Twitter is great for many things.  It helps you share and communicate.  It provides an endless stream of adorable cat pictures.  It delivers breaking news in bite-sized nuggets, and it can satisfy your occasional need to get outraged about something a complete stranger says.  I think you can guess which one this blog post is going to be about. 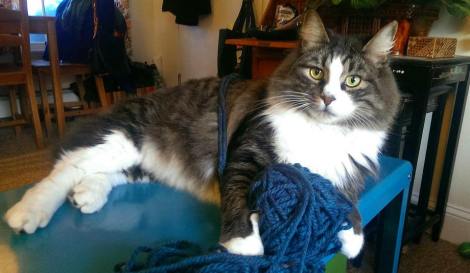 No, not that one.

Myke Cole, a military fantasy author, retweeted this comment and image by the magician behind Fantasy Faction, one of the biggest genre communities out there. 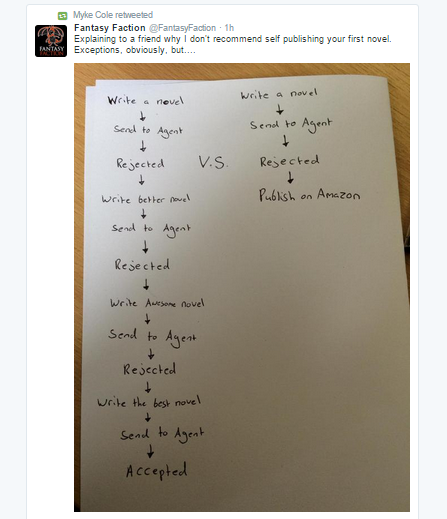 And I was not happy.

First of all, despite the assertion that there are exceptions to what he obviously believes is a rule, the flow of this chart is insultingly reductive.  Let’s establish one thing as the basis for all the arguments to follow: Self-publishing does not equal giving up.

Self-publishing is not the easy way out.

In response to the chart, I scribbled out one of my own, and it immediately sparked a flurry of responses from Fantasy Faction and others: 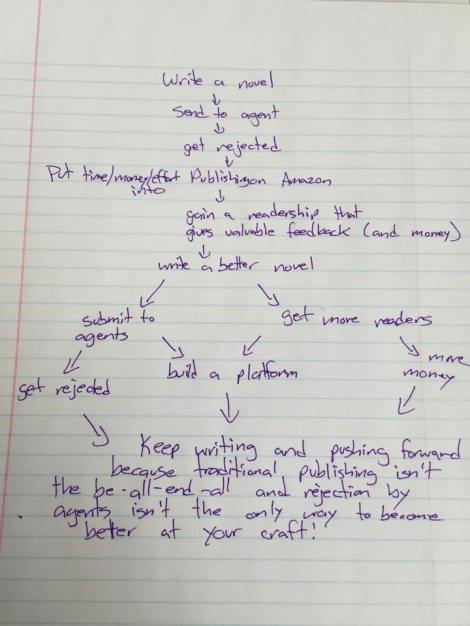 Now, if you can get past the poor handwriting (and the fact that maybe it implies the use of readers as guinea pigs, which was not what I meant), you can see that a) the path that leads an author into self-publishing can be a little more complex than a single rage-inducing rejection, and b) the path that develops after self-publishing can lead to any number of amazing things.

You can kind of follow the Twitter conversation here, but I’m just going to go through and make some points that came out of that discussion and my own experiences with the perceived conflict between traditional publishing and the broad spectrum of indie options out there.

There is a pervasive assumption among traditionally published writers that self-publishing is a secondary choice, and one that is only made when something goes wrong in the traditional publishing world.

If an agent won’t take you to the prom, you’re likely to run with tears streaming down your face into the loving arms of Amazon KDP, that perfect fairytale boyfriend who will accept you for who you are with all your flaws, not just how you sell yourself to the rest of the world.

That isn’t always true.  Yes, KDP takes anyone, because KDP makes a lot of money off of doing what they do.  Yes, a lot of self-publishers have experienced frustration and rejection from the traditional publishing world.  Yes, it is possible to upload a complete mess of a manuscript with a hand-drawn cover and a cringe-inducing storyline.

But a lot of people don’t.  Self-publishing is a gold mine for many authors.  It offers more control over content.  It offers a quicker turnaround time.  It offers opportunities for higher royalties and higher revenues.  It offers an enormous potential readership – and the number of traditionally published authors turning to self-publishing as a better alternative is growing by the day.

There are as many reasons for self-publishing as there are self-publishers.  To persist in the belief that we are all losers who don’t know any better is both narrow minded and ill-informed.

Even though Amazon and the other self-pub giants try to pitch the process as being easy as 1-2-3, it isn’t.  Let’s assume for a second that you actually care about how your product you present to the world.  Let’s assume you have some of the skills to create a quality book, but maybe not quite as many as you need.

Sure, there are people who will publish a sub-par product without editing or cover art.  But serious self-publishers who want to turn a profit will enlist the help of professional editors, talented cover artists, savvy formatters, and web design experts to make sure that they aren’t wasting their time.

Self-publishing doesn’t mean doing everything by yourself, and few people do.  Few self-publishing advice websites recommend going it alone.  Most will advise you to set up a budget for necessary services like editing and cover art – 90 percent of the discussions I had at Pi-Con this weekend were about how important it is to pay fair prices for good work from professionals in the self-publishing world.

A 2014 survey of nearly 2000 authors from Digital Book World found that more than a third of self-publishers hired a cover artist, a quarter sought formatting help, nearly 20 percent enlisted a content editor, and ten percent paid for marketing and promotion.

Crappy books don’t sell, and self-publishers know this as well as anyone.  They are willing to take money out of their own pockets to improve their products – and they don’t get advances.

One of the worst things about Fantasy Faction’s comments was the notion that self-publishers don’t care about becoming better writers.  Rejection by the gods is the only way to get better at your craft.  If you can self-publish, you’re not going to have any motivation to write books that are good enough to make it past the gatekeepers (a term, by the way, that agents absolutely hate).

Wrong.  I don’t know any writer – traditionally published, self-published, or with no interest in being published at all – who doesn’t strive to improve.  I don’t know anyone who ignores thoughtful critiques, or thinks they’re already at the top of their game, or who doesn’t try to write a better book every time they sit down to the computer.  You wouldn’t be a writer, and you certainly wouldn’t be an author, if you didn’t know that there was lots of hard work to do until you drop dead.

We are not slackers.  We are not complacent.  We are just like traditional authors – but we’ve got the balls to do it all ourselves.  Which brings me to my overall point…

There’s nothing easy about going it alone

Writers are creatures of self-doubt, and there’s nothing easy about overcoming the anxiety and uncertainty of putting time, money, and effort into publishing a book with no safety net.  Self-publishing is a risk, both financially and emotionally, and it requires just as much (if not more) courage, fortitude, and sheer bloody-minded determination as sending out queries to traditional agents.

As Myke Cole said in one of his tweets, writing is hard enough.  He couldn’t imagine how self-publishers could manage to do the rest themselves.  But surprise!  One way or another, we get it done.

Personally, I have devoted many hours to squinting at cover images while I edit my art, or screaming at Microsoft Word when my formatting is off.  I’ve stayed up late nights during the work week to finish editing a chapter or perfecting some tiny part of the publishing process.  I have spent days nervously waiting for things to get approved or shipped – only to have to go back and make changes and do it all over again.

It is hard work.  And most of the time, there are few rewards.  It’s discouraging to see my stats flatline for weeks at a time.  It’s not fun to try to urge my friends to leave reviews.  It’s not easy for me to market myself and take on all the self-promotion required to maybe, possibly get one user to add my book on Goodreads.  I have felt like a failure so many more times than I have ever felt like a success.

Self-publishing sucks…but I’ve been doing it for three years with absolutely no intention of stopping, because I love it.

I love holding a finished book in my hand and knowing that I made this.  I love having an Amazon page.  I love writing my blog.  I love those rare occasions when I get to talk to my readers and they smile and get excited and tell me what they think about my characters.  I love seeing my name in other publications, and striving every day to open up those opportunities for myself.  Even if I don’t sell very many books, I love feeling proud of what I do.

Self-publishing taught me that I can do so much more than I ever thought I could.  It taught me that it wasn’t too scary to put myself out in the world.  That I didn’t need approval from some big bad agent in the sky to express my ideas and my points of view.  That there are opportunities for everything if you’re willing to work for them.

Self-publishing is not a cop-out, and it doesn’t have to exist solely in opposition to the traditional route.  Readers want to read good stories, and I think it’s a great thing that there are now so many more ways for them to do that.  Traditional publishing will have to adjust, as all industries do when a disruptive force enters the marketplace, and holding on to damaging notions of the past will only make it harder for everyone involved.

Self-publishers want respect because we do enough to earn it.  I hope the traditional world will be able to see that someday, as the wheat separates from the chaff and it becomes easier to identify and read good self-published work.  There are wonderful, talented, amazing independent authors out there, and they don’t deserve the stigma placed upon them by the traditional publishing juggernaut.  It would be a shame to dismiss them all without taking a really hard look at what they do.