I know, I know.  Every single blog and newspaper and TV show on the 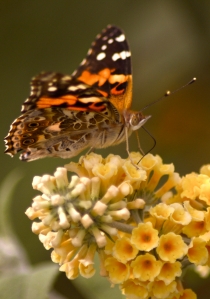 planet is doing a “year in review” thing right now.  It’s not original.  I’m sorry.  But we do it because it’s a fine thing to look back on our accomplishments, our missteps, our joys and sorrows and mistakes.  Those who fail to learn history are doomed…yeah, you get the idea.

Besides, 2012 was a big year for me.  The only year I’ve ever existed, as far as most of you are concerned.  2012 was my year of recovery, of exploration, of risk and redefinition and reward.  It’s been one of the best years in my life so far, because I feel like after 25 years of desperately trying, I’ve finally gotten my feet under me…for the moment.  And that’s something to celebrate.

So here’s a list, in roughly chronological order, of some of the major happenings of the year.

• I spent the first three quarters of the year unemployed and increasingly anxious and strapped for cash.  While I kept my spirits up by doing a lot of creative things like crocheting and starting The Spoil of Zanuth-Karun in April (I think), there was a lot of uncertainty about my future and it was difficult to keep my spirits up about ever finding employment again.  Luckily, in October, I struck gold and began my new job after nearly exactly a year of being out of work.

• I also spent the first months of the year adjusting to medication for depression and working with my wonderful therapist to reconstruct the architecture of my thoughts to allow for a new and hopeful way to look at the world.  I learned that I needed to listen to myself, set my own boundaries when it came to dealing with other people, and take some chances while remembering that failure might hurt, but it wouldn’t kill me.  I’m still working on all of those, but the process led me to…

• …publish The Last Death in March, start my blog soon after, and really try to make a run at this author thing.  I’ve nearly completely overcome the reluctance that led me to hide my creative work for so long, and I’ve gained so much confidence, a couple of good friends, and a lot of opportunities by finally putting myself out there.  I got to see my words in print, and see other people enjoy what meant so much to me, which was the coolest thing ever.

• Throughout the year, I was giving away hundreds of digital copies of TLDTC, totaling almost 1600 at this point.  I gained a bunch of new fans and got to meet some truly awesome authors and readers, which had been one of the best things about this whole ride.

• October was a very busy month.  In addition to starting my new job, I found out that I won the Shelf Unbound contest (in case you haven’t heard), and I spent the whole second half of the month walking on clouds.

• In December, the magazine issue was released to much fanfare.  I sold a decent number of books, but more importantly, I was put in touch with some agents who were very interested in seeing where they could take TLDTC in the future.  I am currently waiting on pins and needles until the holiday season is over to hear what they have to say, so 2013 might be off to a crackerjack start, as well.

And here are some of the things I’d like to accomplish in 2013, because writing them down makes me more or less accountable for them:

• I will finish SZK by the middle of February and polish it up right after.  If I’m still self-publishing at that point, I’d like to have it available by April of 2013 at the latest.

• I will return to The Paper Flower right after that, because the first book is nearly done and it’s actually better than I remember it.  If all goes well, you might be seeing it in July or August.

• I will try to develop more in the way of original, stand-alone content for this blog, so it’ll become more than just a series of posts whining about writer’s block.

• I may be moving house in the spring, and if so, I will be getting a cat.  This will make my life nearly complete.

• I’d like to get more involved in doing guest spots on other sites, so if you know anyone who’s looking for a contributor, please send them my way.

• I’m going to try to read more.  I read deeply rather than broadly, and it’s nearly impossible for me to immerse myself in someone else’s work when I’m writing my own, but if there’s one thing I’ve learned from getting my feet wet in the industry, it’s that there are more good books out there than I can ever hope to read in ten lifetimes.  But that doesn’t mean I shouldn’t try.

• I’m going to give up chocolate and run a million miles a day and eat kale every Wednesday and only buy vegan shoes and…oh, who am I kidding.  No one actually does any of that stuff past January 3rd, anyway.

So there you have it.  My past and future, all laid out neatly and tied up with a bow.  I hope that your 2012 was as generally positive as mine was, and that your 2013 is a time of happiness, excitement, love, forward motion, and lots and lots of good books.  Have a very, very happy (and safe and not-too-drunken) New Year, and I’ll see you on the flip side.