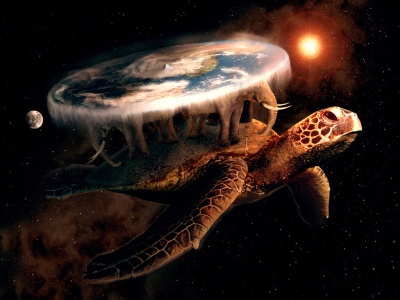 If you haven’t heard by now, the literary world – and the fantasy genre in particular – has lost one of its most brilliant voices.  Terry Pratchett died today after several years battling an aggressive form of Alzheimer’s disease, leaving behind dozens of novels and one of the richest, cleverest, and most challenging fantasy worlds ever created, and one that had a profound impact on so many aspects of my life that I’ve long since lost count of how many times I’ve revisited the same books over and over and over.

I am probably so attached to Discworld because I discovered it in my early teens, when I was just starting to realize how difficult it was to make sense of the world I was living in.  It will hardly come as a surprise to those of you who know even a tiny bit about me that I was an awkward, angry, depressive, frustrated, and easily bored adolescent who took refuge in reading like a snail in a shell.  Most of my memories from that time are unpleasant ones about being told that I would have to come out someday to face reality head-on, and I should just suck it up, cut my hair, learn how to wear heels and get it over with.

I didn’t.  Not for a long time.  I liked my shell.  I liked thinking that fantasy was the way to hide my head in the sand while being anyone I wanted to be, and living any way I wanted to live.  It was all so different and exciting and exotic, as fantasy worlds should be.

There was the charm and nobility of Tolkien, the sweeping, soapy melodrama (and questionable suitability for my age group) of the Wheel of Time, the imaginative tangibility of Tad Williams, and the taste of blood and earth and hope in Stephen Lawhead.  I loved them, and I longed to inhabit those worlds, but part of me always knew that I wasn’t ever going to be cool enough or courageous enough or romantic enough to get much screen time in any of those places.

And then I met Rincewind.  And honestly, I really hated him.  He was awkward and frustrating and kind of whiny and a bit of a buffoon and – oh God, he was me, wasn’t he?  I hated me.  And honestly, I almost didn’t go back to the library for another one, because I couldn’t stand feeling so similar to someone who was basically just comic relief.

But I did go back.  And I met Sam Vimes, and everything kind of changed.  Here was someone who kept moving forward no matter how much he hated himself and struggled with flaws he couldn’t help having.  He was wry and abrasive and a little selfish, and he wasn’t quite sure if he was ever doing the right thing, but he was damned if that ever stopped him from trying.  Sam Vimes faced his world the same way I faced mine (only with slightly more alcohol), and suddenly I started to realize that not every hero has to laugh at death while waving their sword at the enemy from atop a noble steed.  Sometimes you can get away with standing to the side at a judicious distance, hiding a wheeze.

Ankh-Morpork and its environs were full of those not-quite-heroes.  Discworld was full of cowards and con men and outsiders and people who spouted nonsense and people who spoke so much truth that it had to be wrapped in humor just to get it past the filters in your brain.  It was full of hard and unexpected things to struggle with, and there was always someone willing to eat what you wanted to throw away.  It was full of life, bitingly observed and perfectly captured, and no matter how many new books I added to my shelf, there was always, always something new to learn about how to be smart enough to take on my own life in my real world, too.

And that’s really the beauty of Discworld.  Pratchett wrote fantasy that sticks a knife in your gut, rips you open and forces you to acknowledge that all people in all worlds are basically the same, and we’re all kind of equally gross and squishy inside.

His work taught me lessons that every teenager needs to hear – chief amongst them being how to kick ass – and he did it in terms that were so unexpectedly personal to me that they have sunk in deeply and stuck like nothing else.  I cherish his wit and his ability to make me laugh out loud, but more importantly I cherish his shrewdness of mind and the skill with which he infused his characters with such an ability to get under your skin, even while they were changing out of theirs.

I know I’m going to go home tonight, pour myself a glass of fruit juice, and spend some quality time with the six shelves of Discworld books I’ve collected over the years.  If you haven’t read one, now is as good a time as any.  I always tell people to start with Men at Arms, one of the first Vimes books, but Guards! Guards! is a good jumping off point, too.  Regardless of where you start, I hope you enjoy them even a fraction as much as I have.

Thank you for leaving such a marvelous legacy, and making us laugh the whole time.  We’re in your debt.