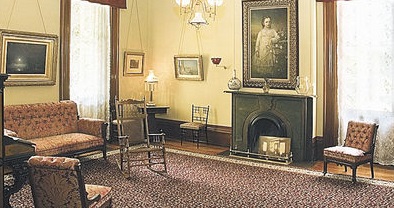 Martin sat quietly on the sofa in the good company parlor, trying not to squirm around.  His mother had removed the thick, slightly yellowing plastic that usually covered the white brocade, which was an exceedingly rare event.  He wasn’t sure he really understood the point of white upholstery that had to be protected like a dragon’s horde of gold.  Even on such a special day, his mother had told him to take off his shoes before treading on the gleaming carpet so he wouldn’t make tracks, and he swung his sock-clad feet back and forth a few times, nervousness overcoming his best manners, before his father glared at him and he instantly straightened his spine and stopped every movement.

In the white parlor lived the Victrola, too.  His parents would play records when they had company round for dinner, long after Martin was supposed to be in bed, and he would sneak down the stairs and peer through the banister, risking a thorough scolding.  It was his special birthday treat to dress up in his Sunday clothes and sit on the sofa while his father selected the perfect song to delight his young son.  Sometimes his father would suddenly stand up and grab his mother’s hand, swinging her out of her seat and pulling her close to dance the two-step while Martin clapped his hands and laughed before his mother would take his hand, too, and they would dance all together until the needle scratched along the record’s edge.

It was his birthday today, too, but it was unlikely that he would hear the Victrola sing until very late that evening, if at all.  Pastor Risling didn’t like records, and he didn’t like that Martin’s father owned his Victrola.  Martin wasn’t sure what Pastor would say if he knew that his parents sometimes danced.

Today, Martin was turning seven, and that was a very special birthday for any young lad or lady.  It was the day Pastor Risling read from his big green book, made of pressed yew leaves and sheepskin, and told the waiting child if he was going to heaven or going to hell.

The starched collar of his best dress shirt felt a little too tight on Martin that day, and he would have sat on his hands to prevent him from tugging at the neat knot of his tie if he wasn’t so afraid of marking the couch with some bit of grime that had escaped his mother’s furious scrubbing that morning.  Pastor Risling was watching him, now.  He had finished talking to his father, and soon both parents would be sent out of the room.

It was a private affair, as well it should be.  Martin could choose to tell his parents the outcome of his reading, if he wished, but most people advised against it.  The truth always came out, of course, one way or another, but if he didn’t tell, he might have a few more months of favor.  A generous family might simply cast out a wicked child, to fend for himself in the far-away, hidden Valley with the other sinners who scraped the rocky earth for nasty, woody roots and huddled in rags against the cold, guarded by Pastor’s obedient followers with better souls.

But most of the time the children were taken away in the middle of a moonless night and simply never heard from again.  Martin had been hearing tales of the purgatory of naughty children since before he had left his mother’s womb, and had always made sure his door and windows were locked up tight before he would ever fall asleep.

He was more than a little bit terrified.  He had a vague notion that he had never been quite up to par, reinforced by the lengthy, thunderous sermons Pastor Risling subjected his flock to every morning before the sun was fully risen.  Perhaps it was because he had never been able to focus on his lessons properly after two hours of worship at the dark beginning of every day.  His teacher had hit his open palm with a ruler a week ago for being inattentive during mathematics.  He had hidden in the trees and cried for an hour during lunch, afraid that such a punishment so close to his judgment day would count as a deep black mark against him.

Pastor Risling was saying something, and Martin swallowed hard to get rid of the queasy lump of fear in his throat before he dared reply.  He was a frightening man, tall and broad and gray haired, though he seemed much smaller than usual without his billowing robes and the added bulk of the pulpit.  He didn’t look quite real, sitting on the matching chair halfway across the room, as if he was just a poor, shrunken echo of the spirit that howled and rang through the church pews every day.  Martin had never seen him looking so ordinary before.  He wasn’t sure what to make of it.

“Yes, sir,” he said, assuming that was the right answer to whatever it was  He could hardly ever go wrong with saying “yes, sir,” but he nearly melted in his seat when he realized he was still making mistakes even at the moment of his ultimate fate.

“Are you ready?” Pastor Risling asked, his bony finger slipping in between the pages to lever open the tome that took up most of his lap.  A pen appeared in his other hand as Martin craned forward to see what was written on the brownish, mottled pages as the heavy cover swung open with a puff of dust.  “What would you like it to say?”

“Will you be a good boy, or will you be wicked?” Pastor asked, looking at him sharply with his bright, beady eyes.  “You must decide.”

“But isn’t it written there, sir?”

Martin felt like he was going to cry again.  He didn’t understand.  “You mean I get to pick?”

“Of course you do.  It’s your choice whether you’ll be an upright man or a bad one.  Haven’t you ever been listening?”

A tear squeezed out from the corner of Martin’s eye when he realized he must not have been.  It was so hard to stay awake before sunrise.  He may have missed a word or two.  The thunderous tone may have made it hard to listen to anything but the rumbling of brimstone from beyond the Pastor’s ken.  From the first time he could start to puzzle together the meanings of strings of words, he had heard a lot about the yew book, and a lot about hell.  Perhaps he had connected the two in a way that was not entirely intended.  His teacher was right to punish him for his wandering thoughts.  He must be the worst kind of sinner.

“I’m sorry, Pastor,” he sobbed once he had stuttered out his confession in broken syllables.  His nose was dripping onto his clean shirt.  He wiped the dribble with his hand, and then immediately stuck it under his leg to stop him from making such a crude gesture again.  The realization that he had now ground his snot into the snowy brocade made him cry even harder.

“There, now,” Pastor Risling said soothingly, holding out a handkerchief.  Martin wasn’t sure if he should take it.  He didn’t want to get it dirty, too.  “You’ve always been a fine fellow, if a bit of a flighty, timid one.  I’ll put you down as a good boy.  But you’ll have to stick to it, do you understand?  This page will be filled with all the deeds you do in your life,” he added, flipping quickly to another page covered in letters, but turning back to the blank sheet too quickly for Martin to read any of it.  “You must commit to making sure that you help the world more than you hurt it.”

“Yes, sir,” he whispered.  “I will try.”  Martin watched with wide eyes as Pastor wrote his name in a big, round hand at the top of the page.  “You’re not going to ask my teacher about mathematics, are you?” he could help but ask.

Martin had never heard Pastor Risling laugh before.  It was a nice laugh, like his father’s laugh, and it made him feel a little bit better.  “I most certainly will,” the Pastor said, shaking his finger at Martin with false solemnity as he closed the book.  “You must learn all your lessons if you are to go anywhere in this world or the next.”  Martin nodded quickly and earnestly, which made the Pastor smile again.  “That’s a good lad.  Now, I know your parents are very formal and upright about this sort of thing, and rightly so, but do you think that before I go, I might have a bit of a listen to the Victrola?”

One Reply to “Short Story Friday: The Book of Yew”