I was very much caught by surprise when browsing my Twitter feed this weekend.  Amidst the cat pictures and New Year’s wishes and hashtags, I came upon a New York Times Sunday Book Review interview of short story author and poet Russell Banks.  The lede caught my eye instantly and so inflamed my sensibilities that I instantly clicked on the full article, as the New York Times no doubt intended.  Why is this important, my dear readers?  Because the lede was this:

Have you finished punching your pillow?  Okay, come and sit down again.

I’m not that astonished at the fact that someone who writes literary fiction sees speculative fiction as somewhat “lesser” in a sense.  It’s a common reaction.  The majority of reviews for The Last Death of Tev Chrisini and The Spoil of Zanuth-Karun start out with “I don’t usually enjoy fantasy, but…” which is a line I’ve come to cherish, because it means they’ve changed their mind after reading what I’ve done.

I am, however, bewildered and amazed that the reason why Banks eschews fantasy is because he believes there is a lack of seriousness in the way fantasy addresses mortality and the meaning of existence.  “Thomas Pynchon says he takes serious writing to be that in which Death is present,” Banks said in the interview. “I agree.”

Death is not present in fantasy?  Are you mad?  Even if we forget the sustained and brutal bloodbaths of someone like George R.R. Martin, to whom death is a plot device gleefully flung about with wild abandon, there is no fantasy story ever written that does not involve the contemplation of mortality.

Whether you are examining the dubious benefits of everlasting life through Tolkien’s wistful Elves or racing to save Osten Ard from the evils of sorcery, death is what every character tries to avoid or embraces with honor.  It is what makes them craven or courageous, good or evil, likable or not.  It is what drives betrayal and self-sacrifice and greed.  It is why the quest matters.  It is why they fight.  It is why life matters, and it doesn’t make a damn bit of difference whether you’re looking through the lens of a dwarf or dragon or a gelatinous lump of alien goo.

All things strive to live.  All things wish for happiness.  All things try to hold off their own demise.  Death colors everything we do in every way, and there isn’t a story in the world that doesn’t, in some sense, speak to this fundamental shared truth: the end is coming no matter how hard we try.  It’s what we do while we’re on earth that matters.  There hasn’t been a story since the far-off days of the ancient bards that has ignored this.  In fantasy, we keep that primeval fear of the endless darkness alive in ways that no other genre can do.

In speculative fiction, the dangers are real and immediate.  The stakes are always astronomically high, and entire civilizations are often snuffed out with the snap of the evil sorcerer’s fingers.  How is death not present?  How does the constant and immediate threat of total annihilation and all-consuming heartbreak lack seriousness?

If you don’t enjoy fantasy, that’s totally fine.  It’s not everyone’s cup of tea.  But it is shocking and shameful – as an established author, nonetheless – to dismiss an entire rich and complex body of work cherished by millions upon millions of avid readers who just want to live half as well as their heroes do before they, too, meet their unavoidable end.

It makes me sad to see that notable figures in the literary world have such a lack of respect and a lack of understanding about other genres.  I sincerely hope Banks finds someone to correct his misconceptions.  I can think of at least three or four good books I would like to throw at his head.

What titles would you give him to set him straight if you could? 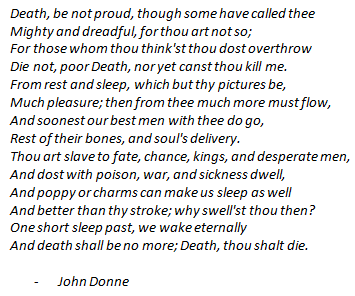 6 Replies to “Death be not proud: Mortality, fantasy, and a smidge of rage”